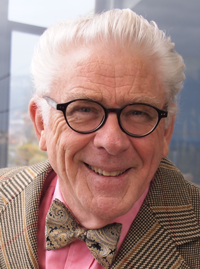 Saxby Pridmore is a Professor of Psychiatry at the University of Tasmania. He has written several textbooks and over two hundred academic papers. Saxby was made a Member of the Order of Australia for services to psychiatric treatment and research.

He is a also a poet, with almost 300 poems published regularly since 1986 in diverse publications including Quadrant, Studio, Famous Reporter, Blue Dog, Overland and Island. A select anthology of these poems, White-out, was published by Lacuna in 2016.

Saxby was hewn by the Australian bush poets, sand-papered by Les Murray and W B Yeates, polished by Bruce Dawe and Mary Oliver, and is given an occasional light dust-off by Michael Leunig.

He and his wife Mary have a son and a daughter, and three grandchildren.