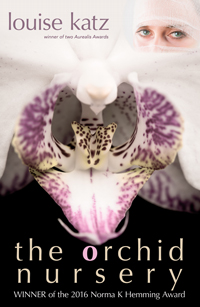 WINNER of the 2016 Norma K Hemming award for excellence in exploration of themes of diversity in speculative fiction.

“The Orchid Nursery is a book of lasting significance to Australian literature, regardless of genre.” — Sarah Endacott

“Mysterious and compelling, ... etched with a grim humour in its dark evocation of a world both eerie and strange and yet also disturbingly familiar.” — Libby Hathorn

“A powerful story, so visual and present it feels like a cross between a painting by Hieronymus Bosch and M C Escher ... Confronting in its truths, The Orchid Nursery’s richness of language also layers it in warmth and humour.” — Stephanie Smith

“A superbly crafted vision of a toxic cultural wasteland. Three women: rebel, zealot, hag. Three journeys through a disintegrated future. Check current news reportage before claiming the horrors of The Orchid Nursery could never come to pass within our lifetime.” — Cat Sparks

“an inventive and memorable work of literature” — Jane Sloan

The Fifteens of Stone House have reached Attainment: the day ‘girlies’ may Beseech for the privilege of being Perfected and serving as womanidols in the Orchid Nursery. Among the Stone House girlies are Mica, a pious believer, and Pearl, vivacious and dangerously irreverent.

When Pearl goes missing, Mica hopes fervently that her friend has been chosen for Perfection. But Mica finds stronger indications that Pearl has absconded, including a map that shows a path out of Perfect State towards the boundary where Civilisation meets Unrule. Mica feels bound by love and duty to seek Pearl — to save her from punishment if she is caught by the Ecumen or, worse, if she has left Civilisation.

Mica's search first takes her to Hagovel, the crossroads where the cursed Hag is suffered to exist in miserable solitude — an object lesson for the disobedient. Beyond Hagovel is a frightening physical and moral terrain where insurgents and outcasts are still fighting a strategic war against the clerical dictatorship.

But first Mica must bring herself to violate the secret-sacred space that is the Orchid Nursery.

Through its youthful protagonists The Orchid Nursery explores sexual politics and the co-opting of religion to perpetrate extremes of misogyny, violence, control and obliteration of the cultural and historical record. It also sees the possibility of hope emerging from the worst kind of dystopia.

“The reader is hurtled pell-mell into a febrile world of strong and desperate characters, alien lore and changing loyalties. As Pearl and Mica avoid ‘attaining Perfection’ and the Orchid Nursery, they make their separate difficult journeys through a dystopian world that Katz presents with luminous, edgy and at times almost unbearably vivid descriptions. Mysterious and compelling, the narrative is etched with a grim humour in its dark evocation of a world both eerie and strange and yet also disturbingly familiar.”
— Libby Hathorn

“A powerful story, so visual and present it feels like a cross between a painting by Hieronymus Bosch and M C Escher … if they’d both read Riddley Walker and The Road. A fundamentalist ruling class and its deformed creed are the brutal gardeners in the nursery; meanwhile, one young woman escapes, knowing only what she cannot live with. Confronting in its truths, The Orchid Nursery’s richness of language also layers it in warmth and humour.”
— Stephanie Smith

“With more than a casual nod in the direction of Atwood’s The Handmaid’s Tale, The Orchid Nursery is a chilling tale of a dystopian future in which the concept of form following function and perceptions of female purity are literally and destructively intertwined. The novel is an examination of culture disintegrated through the abandonment of critical thinking and the embrace and exaltation of ignorance. When meshed with terrorism and environmental catastrophe, what emerges is a toxic cultural wasteland, a putrid blend of anti-intellectualism, dogma, fear and tribalism, the glorification of the emotional and irrational. Check out recent news reports coming out of America and the Middle East before telling me such things could never happen in our lifetime.”
— Cat Sparks

“[Katz] has created [flavourful lingering resonances] through her crafty, mischievous, and strikingly original use of language. … [T]ongue-tickling compounds, … neologisms, acronyms and puns proliferate in an exuberant, irrepressible, entertaining but ultimately alarming novel.
… [E]specially distinctive is the marvellous way [Katz] is able to slide and glide among registers in a manner that compels us to think about the contradictions, hypocrisies, and bizarre ideologies that have given rise to this abominable dystopian place overseen by a perverse fundamentalist regime. … [T]he politics of The Orchid Nursery lie, in part, in the subversive manner in which language is used.
… Like her great inspirations, Margaret Atwood and Angela Carter (to whom she makes allusive nods), [Katz] understands that humour is a fine way to get someone involved in a story, and in this nimble, and oftentimes gleefully playful novel, the horrid and hilarious exist side by side.
[Katz uses] three equally interesting and sustained women’s voices to create … a textual mosaic that obliges us to be actively involved in joining the dots rather than passively consuming the story; [Katz] speaks to our creative faculties as readers. … [A]n inventive and memorable work of literature.”
— Jane Sloan

“The Orchid Nursery contains within its pretty covers, a vicious and unflinching dystopian Australia. One where women have been bred to follow scriptures and beliefs that they should serve men, they should long to be ‘Perfected’. …
But, while the story is a bitter flavored pill to swallow, the writing, oh, my. The writing is superb.
One scene Mica, our pious little narrator, experiences is one of the most chillingly horrific scenes I’ve read (and I’ve read some whizz bang horror!) in all my born days. Yet, the way in which it was written drew me in, caressed my inner editor and led her merrily down the garden path. I was so conflicted. I loved it and hated it in the same breath.
Few authors have had this level of impact on me as a reader, and even fewer have been able to get me to check my hatred for open misogyny at the door and swallow my anger. …
I don't know if I really love this book or I hate it, but it’s a five star read from me because of how much it has made me think about the ideals and themes in this book, and also for the beautifully crafted writing and amazingly complex characters.”
— Lynxie, Coffee2Words. Read the full review.

The judges for the award, editor Sarah Endicott, editor-publisher Rob Gerrand, and writers Tess Williams and Sean McMullen, had this to say: “The Orchid Nursery is one of those dystopian novels that haunt well after reading. Women are chattels, dehumanised, sexualised and demonised in ways that are only just beyond belief. So many of this future history’s social mores are rooted in our own, present dystopias, in ways that Katz neatly understands when she sends her girls out on journeys of self-discovery. … The novel explores the human condition in a surprisingly dark context.”

Sarah Endacott added: “The Orchid Nursery is a book of lasting significance to Australian literature, regardless of genre.”