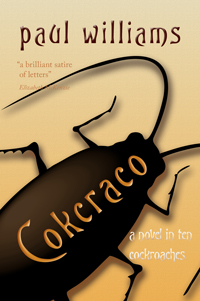 An exhilarating, playful and witty novel about writing, identity and literary KritiKs
(not to be confused with KriKits).

"A strange, funny, intelligent and quite unforgettable novel. What Flaubert did for parrots, Mr Williams has done for the humble roach." — Jeffrey Poacher

"while predominantly a satire …, Cokraco also works as a madcap mystery [that] generate[s] effective suspense – of the B-grade horror film variety." — Amy Brown

From da kokroach point of view, humans are irrelvant. Kokroaches no like em. Doan want em. Do not even tink bout em. Doan care for deh conversations. Books we like to eat, not read. We wish humans dead so we can eat em too. — Sizwe Bantu, The Cockroach Whisperer, 2010.

Sizwe Bantu is the Greatest African Writer of All Time – according to Timothy Turner, failed academic and lover, who not only lives by Bantu’s words but keeps a giant rubber cockroach in homage to the writer of the renowned ‘cockroach stories’.

Inspired to travel to Bantu country, Timothy takes up a position at a university near the place rumoured to be the reclusive writer’s residence in the misty Zululand hills. Instead of drawing closer to his source of inspiration, Timothy is drawn into a Machiavellian world of campus politics and suppressed desire.

As Timothy grapples with the mystery surrounding Makaya, the academic he has replaced, and the demands of his students, particularly the attractive Tracey, he must confront his own paranoia, prejudice and insecurity in a search for the shocking truth.

"Here, in a quirky new novel venerating cockroaches, Paul Williams has served up a veritable treat especially for southern African literary buffs who have not yet lost their sense of humour about themselves or their discipline. The odd title, in case readers are wondering, is simply the result of a typo error artistically appropriated, a taste of the type of satire to follow. …
There is little to find fault with in this carefully-crafted novel where not so much as a comma is out of place. … It is indeed a clever spoof of postcolonial and postmodern literary studies, expertly written, greatly entertaining and undoubtedly deserving of our attention – if for no other reason than it tackles the important issue of cross culturalism as its central theme in a highly-original, funny but also thought-provoking manner. To my mind, Paul Williams more than rivals the master academic satirist David Lodge (author of Small World) – in this corner of the ‘small world’ at least!
— Drew Shaw, "A cockroach perspective", scrutiny2 19(2) 2014 (full article)

“Paul Williams has written a novel that provides every conceivable narrative pleasure. Cokcraco is a brilliant satire of letters set against the backdrop of post-colonial Africa. I cannot praise this novel highly enough.”
– Elizabeth McKenzie, author of Stop That Girl!

"Ever since Don Quixote, novelists have been taking the piss. In Cokcraco, Paul Williams does exactly that, turning the full beam of his satirical spotlight on the civil wars of university departments, the cultish bunkum of literary theory, the self-obsession of creative writing courses and the self-flagellation of white liberal guilt. In the process, Mr Williams also succeeds in poking fun at the conventions of the novel itself. Cokcraco reads like a collage of what one of its pompous academics would probably call discourses – pseudo-scholarly footnotes, pseudo-scientific articles, pseudo-poems, pseudo-stories and a cod travel guide memorably called Crowded Planet. This is a novel that does its best to defy classification. This is a novel that sets out to be a real genre-bender – it’s at once a cross-cultural comedy of manners, a campus comedy transplanted to post-apartheid South Africa and a sly philosophical whodunit.
So there is some serious fun to be had here, but with something darkly serious lurking under the lush tropical surface. In this country of gated communities and ubiquitous Kalashnikovs, violence never seems far away. The novel’s central character, an expat Australian academic called Timothy Turner, has braved the post-apartheid chaos and come to KwaZulu on a quest to find a renowned local writer whose diverse literary output celebrates the cockroach as an emblem of both oppression and resistance. This quest turns out to be a lot more than the ingenuous Dr Turner bargained for. By his side, the reader will encounter cockroaches in every incarnation under the sun – as scientific marvel (surviving nuclear war and all that), as cultural marker (the rich don’t like them), as interior decoration (glued onto furniture as a kind of ornamental strip), as embodiment of the frustrated male ego (well, we all know who Gregor Samsa is), as narrative voice, as literary inspiration. The result is a strange, funny, intelligent and quite unforgettable novel. What Flaubert did for parrots, Mr Williams has done for the humble roach."
– Jeffrey Poacher, September 2013

"Cokcraco … is a clever and playful novel that resurrects Kafka's motif of the cockroach. … The cockroach is used to expose the gap between seemingly antithetical standpoints: creator and critic, colonised and coloniser, perception and reality. The innovation of this work resides not only in the multiplicity of the voices presented but also the structure of the novel.
… Williams' novel is at once a second person narrative, an epistolary fiction, a literary dissertation (complete with footnotes and a list of references) and a postmodern treatise exposing false binaries. Each chapter begins with an encyclopaedic entry chronicling a specific type of cockroach, revealing their characteristics and pervasiveness. These entries serve as a frame for the chapter, mirroring the difficulty of reversing preconceived perspective and stereotypes. The satirical use of the travel guide aptly named Crowded Planet positions Timothy as the 'foreign other' attempting to navigate the South African space. Timothy's reliance on this information creates comical scenes of misinterpretation … While the mystery of Sizwe Bantu's identity is the main storyline of the book, the multi-layered approach introduces key sub-plots that are intriguing. I was particularly enthralled with Timothy's past relationship with 'M', evoked through a smattering of unsent letters. …
These elements, coupled with the inter-textual allusions to various African writers and Williams' stylistic decisions, serve to make the novel enjoyable to read. As a multi-vocal epistolary novel, this story will appeal to a wide readership: those interested in a particularly well-crafted post-modern story of discovery as well as those 'kritiks' who enjoy unpacking the significance in the portrayal of the constructed self."
– Gina Brock, Social Alternatives 32.4 (2013) 52

"If Heart of Darkness weren’t Conrad’s work, but instead a jolly collaboration between JM Coetzee and P. G. Wodehouse, it might have resembled Paul Williams’ latest novel, Cokraco. Part metafictional conceit, part romantic romp, all satire: Cokraco is as difficult to define as it is enjoyable to read.
… while predominantly a satire aimed at creative writing academics, Cokraco also works as a madcap mystery. Deliberately hammy in places, Williams’ pacing and description still manages to generate effective suspense – of the B-grade horror film variety. His taut and vivid descriptions of the South African setting add to the tension and eventual release."
– Amy Brown, Text 18.1 (2014): http://www.textjournal.com.au/april14/brown_rev.htm