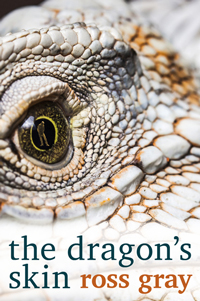 “The Dragon’s Skin heralds an innovative and powerful new voice on the Australian crime scene. … an involving and satisfying thriller …”
Newtown Review of Books

“David Edge is a Chinese Whisper.” So Constable Carol Porter is informed while digging into one of Edge’s cold cases, unsure whether she’s investigating the crime, the crim or the cop. To his former Homicide colleagues, he’s the star detective who went bad, or pretended to, while undercover.

According to rumour, he’s the ex-cop who killed notorious hitman “Whitey” Poynter and took over crime lord Jack Barker’s enterprises. To the ladies of The Rose Garden and The Crimson Grotto, he’s the Big Boss, a gentleman who looks after them better than Barker did.

To the tough-as-nails Maeve Maguffin, booted off the force for making a pass at her female superior, he’s the former rookie who puts work her way occasionally. To the kids at the drop-in centre, he’s the mystery man who lives upstairs, teaches self-defence and for whom they gladly run errands.

And to petty thief Ben Bovell, Edge is his only friend and his hero. When Ben walks into his daughter’s day-care centre wearing a bomb, he will only negotiate with Edge – the one person he trusts to keep a terrible promise. In the aftermath, a cast of cops, crims, muscle for hire, sex workers, street kids and bystanders encounter Edge as he too delves into a past he’d prefer was undisturbed.

Who is the real David Edge? David Edge is a Chinese Whisper …

“The Dragon’s Skin heralds an innovative and powerful new voice on the Australian crime scene. …
The first book in the David Edge series, The Dragon’s Skin is an intriguing entry into the world of Australian crime fiction. For all that he is the protagonist, David Edge remains as much a mystery to readers as he is to his associates. We are never invited into his point of view, instead learning about him through the eyes of the supporting characters, few of whom are entirely straight or reliable. Some see him as a fallen hero, betrayed by the police powers-that-be in an attempt to entrap an underground kingpin; some as a fairy godfather, lifting them out of the depths of drug addiction and a life on the street; still others believe the stories they’ve heard of a good cop enticed into the lucrative world of brothels and contract killing. No one knows who David Edge is: sinner? Saint? Something in between? But it’s clear that’s the way he likes it, and he uses others’ uncertainty to his advantage.
Not allowing readers into the protagonist’s point of view is a bold and interesting choice for such an intricately plotted novel, and relies on readers being able to keep up with the almost constant introduction of new characters to talk about or interact with Edge as well as the mosaic of clues being laid out. It also means reading backstories for each of those characters, a number of which begin to feel superfluous as the novel moves deeper into the plot: how much do readers need to know about someone they meet for only a few pages, and who has little effect on the larger narrative? However, Ross Gray excels at description and meeting these new individuals never fails to be a treat …
… Gray’s style means the narrative has a lively pace, and no scene is allowed to linger too long. Readers who pick up this book won’t fail to be rewarded with an involving and satisfying thriller peopled with complicated and interesting characters it’s a pleasure to spend time with. It will be fascinating to see what further books featuring David Edge will bring and to find out if readers will ever be allowed to come to know him better.”
— Kylie Mason, Newtown Review of Books. Read the full review here.